_In the winter of 2006, Steve Smith and his brother Alan decided it was time for them to do something different. As far back as they could remember, their family had always had some kind of connection with flying, so, they decided that whatever they did, it should be aviation related. They decided to build an airplane.

Neither Steve nor Alan wished to launch into a project that would take forever to finish. As they searched for a suitable aircraft, near the top of their list was: proven design, availability of an advanced kit and demonstrated ease of assembly. They also started to look for a building site that would accommodate their project, preferably one that offered "builder-assistance".

After weeks of research, they had found what they were looking for. During those weeks however, the project had also evolved: they had now decided to build TWO airplanes together, one for each of them! But perhaps even more important, they had found a secret weapon that would ultimately insure the success of the whole venture: Alan's ever-supportive wife, Nathalie.

The following story is a summary of the whole experience, as told by Nathalie. She was there every step of the way, making sure the hundreds of parts and pieces and tools were identified, ordered, and on-hand for Alan, Steve and their helpers. As the airframes and engines and instrument panels came together, Nathalie also made sure the wood stove didn't go out, that check-lists and schedules were adhered to, and that snacks and lunches were ready when needed. She even got to know the staff at the local Ace Hardware store very, very well... This is their story, as told by Nathalie:
_A common predilection towards technology and gadgets eliminated older craft. Our price constraints narrowed the field even more. Our requirements and objectives increased as we learned about all of the options and alternatives. In the end, we just couldn’t find a COT (“commercial off the shelf”) aircraft that delivered what we were looking for.

_Rudder workshop (Sanity check of “How/when/where to build”)
_But before we fully committed to the project, we wanted to do a last sanity check. My husband and his brother had quite a bit of mechanical aptitude and experience but that experience had been mostly limited to cars, bicycles, boats, and motorcycles. I had basically no experience and never felt much aptitude either! None of us had ever pulled a rivet, twisted safety wire, or even seen a cleco. In order to get an idea of what we would be up against we enrolled in a two day rudder build class the last weekend of February 2007.
_The class gave us an opportunity to get hands-on experience with some of the tools, start learning the vocabulary (cleco, rivet, etc…), and to get a glimpse into the world of aircraft construction. It also gave us an opportunity to meet Michael, evaluate his shop, and the whole builder assist process, and get a much better sense of whether or not undertaking this project was actually a good idea: could we reasonably expect to build 2 planes in a reasonable time period (less than 6 months)? This was particularly important to Alan and me as we live in Washington State and only had limited vacation time to be on-site. What we could not complete during our vacation would have to be done over long weekend trips. We needed to make sure that we could do it.
_Oh, yes, we also built our rudder during the rudder build!

_“10 Day Build” with “Builder Assist”
_Our vacation started on March 2nd and on Saturday March 3rd, we parked Stephen’s Winnebago next to the Quality Sport Planes hangar and moved in for 2 weeks of long working hours (12 on average) and no weekend breaks as we wanted to make the most of our “vacation”. Our arrangement included the use of a fully stocked workshop, the assistance of three experienced aircraft builders (Ed, Eric, and Doug) and a direct line to Zenair support through Michael Heintz.
_We were constantly puzzling over some innovation on one plane then completing it on the other plane in ¼ of the time. All the while Michael and his crew were keeping a close eye on our progress and offering insightful assistance. The only times that we were left on our own were when we puzzled over our electronic equipment on our instrument panels: serial port replicators, USB hubs, tablet computer interfaces, etc....
_With all the help and average 12 hours day, things moved right along. The first set of wings was ready to go to the painter within a couple of days and was back by the end of the first week. Ed had found a local body shop which had the equipment to paint the planes and Eric gave us the use of his truck and trailer to move the wings one by one to the body shop. Stephen’s wings were next and by the time Alan and I had to leave back for Washington State, both sets of wings had been painted and Stephen’s fuselage and cowling was ready for his paint. By then, it was mostly dependent of the body shop’s schedule and not so much on our degree of completion of the planes.
_The follow-up long weekends
_Even though we made good progress, the 10 day build did not produce flight worthy aircraft. Completion of our projects took several long weekend efforts and a few more hours from our builder assistant Eric. The planes were complete enough to nicely showcase the “build of an airplane process” at Quality Sport Planes Open House in early May with Stephen’s plane as the completed one and ours, mostly complete without the wings attached.
_During a subsequent weekend in mid May, we got to the point of first firing of the engine. This was an exiting moment for all which I had to miss as I was in Oakland airport on my way home to Washington and Monday morning work. This led to much “taxiing fun” along the Cloverdale runway with a close eye on the engine temperature for Alan and Stephen that evening and the following day.
_ Eventually after a couple more weekend trips connecting all the electronic equipments, testing, setting, and calibrating the sensors, and putting the finishing touches (like carpeting the wing lockers), the planes were ready for their inspection in late June. Doug did an EAA Technical Advisor once over on the planes and deemed them ready for their airworthiness inspection. We contacted a DAR and scheduled the inspection for late June. Neither Alan nor I were able to attend but Stephen was on hand in case anything needed to be taken care of on the spot. Eric, Doug, and Michael were also there as Quality Sport Planes was conducting an engine installation workshop that day.
_First flight and Fly-off
_After getting our airworthiness certification it was time to transition our “project” into an airplane. At some point during this adventure, each of us experienced the same thing; we stepped back and looked at the fruits of our labors and saw that it had changed from parts and pieces to an aircraft!
_The time had come to fly! We went down to Cloverdale the weekend before the 4th of July for the big event. Alan was all ready to take the first flight, but as it happened, there was a very experienced test pilot, Paul Reinders in the area that weekend and we decided to ask him if he would take it up the first time. After talking with Michael and Eric, Paul agreed to take our plane up for its maiden flight. There were no problems and he appeared to really enjoy flying the plane. We got a lot of very nice videos and pictures of that first flight as Paul is a very experienced pilot and gave us the opportunities for great shots from the ground.
_Alan took it up himself later on that day and yet again the next morning. I went up in a chase plane with Eric and took some nice pictures of Alan flying our plane over the Cloverdale area. 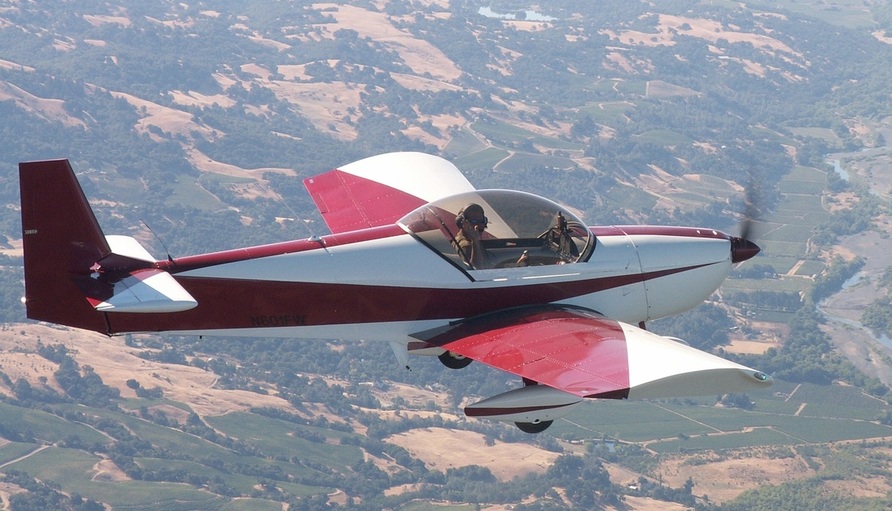 _Then I went back up to Washington and work and Alan stayed behind in Cloverdale. He spent the week flying off the required hours and making small adjustments to throttle, prop pitch, flaps…
_For our first long flight, we decided to be on the conservative side. We cut across to Interstate 5 and then turned left (North) and followed I5 all the way to Washington with small deviations to avoid busy controlled airspace (e.g., Portland). We took the plane to about 10,000 feet and enjoyed the spectacular views (it was a very clear day all the way). We made our first landing for fuel in Ashland, OR and then again in McMinnville, OR. We certainly could have made it home with only one refueling stop but again, we were being very conservative and enjoying the day. We landed in Shelton, WA around 5:00PM that day in less than ideal conditions (gusty winds and parachute jumpers in the pattern) but Alan did a great landing and we were home! Four months after we started the project, our plane was complete, flying, and in its home location in Shelton, WA. 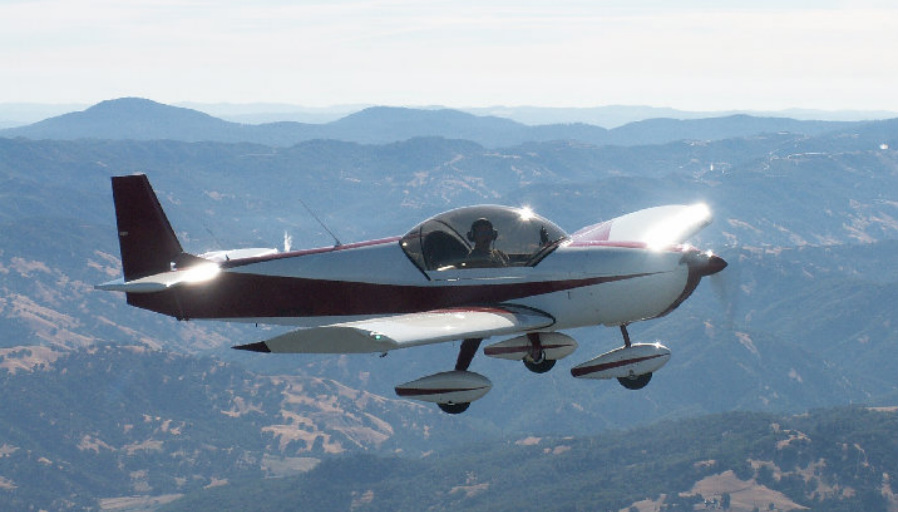 _Special Thanks
Alan and I want to express our heartfelt thanks to Michael Heintz and the crew at Quality Sport Planes: Eric Petersen, Doug Dugger, Ed Dalbec. Very special thanks go out to Lori Dugger, Quality Sport Planes’ office manager: Lori organized a wonderful little surprise party for Alan and I on our 10th wedding anniversary, which happened in the middle of our “10 day build” program and was not a priority for us at the time.